The Beginerringenine of Anno MMXIV

Welcome welcome to a new year!

Alas for 2013, t'was a lovely number now gone, the year itself full of twists and turns.

Normal transmission of Economous Musgrove will resume next week 6/1/2014 (that's how a date is logically writ in everywhere sensible ;p - a set of numbers expanding rationally in scale from least to greatest rather than some un-sensible jumble \o/ )

For those new, middle-arrived or just needing it, here is a link to the very beginning of Economous' tale - and I will be adding a button-widget-graphic thingo to the right that does the same: ECONOMOUS MUSGROVE: The Beginnering.

To tide us all over and as a murky kinda Yule-Christmas-New Year in-the-notion-of-some-sort-of-present-giving-malarkey thing I am well pleased to announce that March this new year (in Australia at least for now) the release of Tales of the Half-Continent (I wanted to call it Sensoria for reasons that I reckon will be clear once the stories are read, but was overruled). 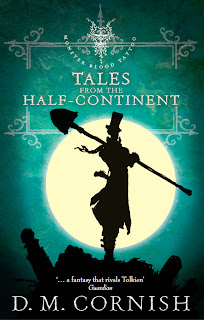 Two stories set in the H-c (one already released in anthology, but now polished and with more WORDS[TM] added) involving new Sundergirdians doing their own thing (by which I mean NOT a sequel of MBT)

So, on we go and blessings to you all.
Testellated by D.M. Cornish at 9:37 am

A prediction for 2014: I'm going to place an order with Amazon.com - Australia in March.

Best wishes for the new year.

A Happy New Year to you Mr. Cornish and my fellow readers. I'm sure we'll receive more details in the coming months, but I found this on Booktopia:

Bunting Faukes has a debt and no way to repay it - times are tough for grave robbers. But a way out is presented in the person of Atticus Wells, a sleuth with strange eyes that see into everything. Virtue Bland is alone in the world. Packed off to Brandenbrass to serve the household of her late father's employer, she has only her old pa's olfactologue to remember him by. But with it she can smell monsters.

I do recall some scuttlebutt about this being in the works from months back. Only thing was, I forgot entirely. Until now that is. Surprised and pleased now to find it all but here and with as handsome a cover as any of the Monster Blood Tattoo books. It's good to see that the publishing folks are still interested in printing your work, and I'm a-hoping the powers that be see this new tome disseminated outside Oz as well. Either way, I may just follow Alyosha's lead come March.

A happy new year to all!
-Ben

I'll second Alyosha's prediction. I'm so eager to read it and I LOVE the cover art! Do you know if it'll be available as a Kindle book?

Now I have some catch-up reading of Economous to do. The past few months became insanely busy for me and I barely had any free time amongst my various obligations. But I've just been blessed with a great new job that will allow a much better work/life balance...and time to read & write :)

A very Happy 2014 to the inhabitants of every continent!

*various geekout noises*
The new stories are coming! And I also have a new job with easier time balancing as well! I'll be getting Tales from the Half-Continent and my missing MBT material in no time!

I was wondering where everyone had scurried off to. I guess life does that to people.

Alyosha seems to be something of a trend setter. I know I'll be doing everything in my power to spend just one more second in the Hc. Here's to a new year, new stories, and a new blogger. God bless you Mr Cornish.

I didn't know where else to put this (didn't want to sign up for the forums), but just a heads-up to DMC: the name you've given the Brandebrass athy in EC (Pike Athy) is different from the name you gave it in CH (Foursdike Athy)...love everything you write, and hope this little catch helps!

This is such excellent news! 2014 is indeed looking better all the time!

Is the new book 2 stories? How many pages (including appendices, etc.)? Will there be about the same amount of illustrations as in the MBT series?

Yes, yes, but when is there more Europe? More Europe, more Threnody!

Have you submitted this book yet for "The Big Idea" on the Whatever blog? (http://whatever.scalzi.com/2013/09/07/big-idea-guidelines/)

He might not use it, as most of his readers are here in the US, but you never know.

It's a fantastic promo opportunity; you'll end up with lots of new fans! :-)

As Alyosha said... international shopping I will go. Yeeeeeks! Doing a happy dance here. Thank you!

I've been away from the H-c world for a while, but was very pleased to find this post. Whilst searching Amazon for your New 'Tales...', I was amazed to see a number of language versions of MBT, congratulations.
Does the New book come in audiobook format? (I would love to revisit the H-c via the tones of Humphrey Bower)
Thanks, Mark.

No way!!! That's excellent news!! Stoked as!!!
I'm hoping hoping hoping to see more of your amazing drawings. I've been ooing and ahing over the pics i took of your drawings at the Brisbane supanova. But like i promised, i haven't posted them anywhere. :-)

Does anyone know if there is a chance at all that there will be a MBT book 4? I'm still on book 2, but am very distressed that I won't see any of my favorite characters again!

Just now, I was able to place an order for; Tales from the Half-Continent. The price is/was $17.97 (US dollars) with free shipping! Yeaaaaa! The web site said it should arrive approximately mid April to beginning of May. For anyone else who might be interested, I have pasted the link for the book at fishpond.com below (note: Author's name is David Cornish rather than D.M. Cornish as we here in the states now him as):

We are specialised in Permanent Tattoo, Temporary Tattoo and Tattoo Removal Please call us on 9916554356 Tattoo removal artist in Bangalore

Nice post! Miami Ink Tattoo Designs, 25,000 Tattoo Designs
Here at Miami Ink, customers come and clarify the sort of tattoo they wish to get and give a point by point clarification of their life stories.
Andrea Mitchelle