Evolution of a map

Now not so long ago (last post in fact) a Nonny Mouse asked me: "... could you maybe talk a bit about the HC map in a future entry, how you went about creating it...?" Well, of course I would - a very helpful idea for a post, to boot.

A map of the Half-Continent and beyond has existed for some time in early, much-rubbed-out and re-worked versions. Below would be version 2.-something (ie: second attempt but with marks added removed added removed and so...) drawn around the years 1999-2000. 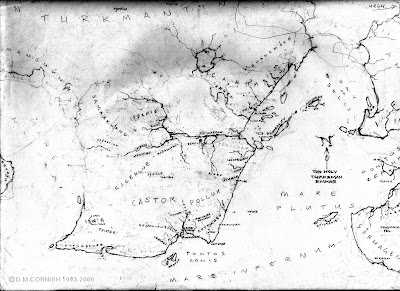 (The Half-Continent is the bottom centre area with "Castor" and "Pollux" written on it - this is the region that is the map published in MBT. As you can see I conceive of much more about it - my hope and prayer is I get to explore it with you all one day.)

It is an incomplete mess, having abandoned it as not being quite right - I was not fully decided on just what names where more important than others, on what words actually belonged on the map and just how parts of it should actually look. This all takes time andif I find I am not content/convinced of something putting it down until some new notion - some happenstance of life - brings a fresh approach.

I have always sought to get the shape of landforms and location of places just right, hence all the re-working. The map is in many ways just one long list of favourite words gathered together in one context and given a spacial/visual relationship to each other.

In 2003 I began to feel a clearer connection with one part of the H-c at least - the region known as Gottland or the GottSkylds. On the way aboard the bus to my job connecting residential phone-lines and home again I fashion this proto-type in notebook 23, shifting and rearranging with liquid-paper and smudgy pen. 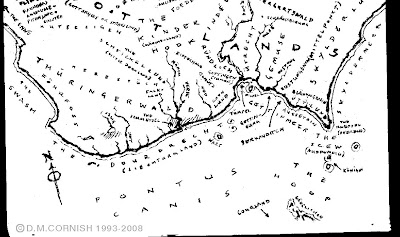 Not long after completing this, the opportunity to begin MBT was sent my way (halelujah!) and in the process of grappling actually writing a full-blown story in the H-c I knew the time had come to make a map, if not of the greater world about, well of the Half-Continent itself at least. I felt I could not get into it with out have a clear idea where one place was to the next - where could Rossamünd go if I did not know where he started from actually was. I certainly had an idea but the moment had arrived to make it "official" as it were.

Now I have - and still do - hesitate to nail ideas complely down, knowing that so many of them have matured so sweetly if given time to develop. Yet there comes a moment when bullets must be bitten and some part of all these years of ideas be fixed, enough at least to allow further development. Consequently, feling very good about the arrangement of places and land, I scanned above notebook scetch map (plus a couple more less ones) into Photoshop and used it as a foundation to build the rest of the map from. Then I gathered all the place names I had collected scattered about all my notebooks and beyond and began to position then and reposition them, drawing out the coast digitally as I went, making large exploratory marks and refining them as the sense of the whole place clarified and solidified. 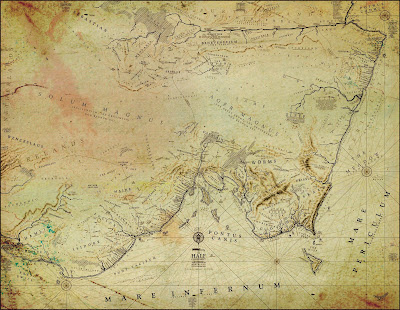 The Half-Continent map is a Photoshop file (not the correct program to use at all, but the one I am by far the most proficient with) made of more layers than is practicable. Yet being in said format allowed me to really cut and paste and reform coastlines and riverine systems until it all felt just right. I have to confess that my first go at it was more Tolkeinesque (I wonder how he'd feel about his name being used in such a way?) with those lumpy hill things and tiny little trees. It did not quite sit right and Dyan, my publisher, was completely correct when she harangued me over its "not-workingness".

I my heart I was really in love with the maps of real history, those gorgeous items made the 17th and 18th centuries. Given this and that I want to make the H-c as plausible as possible, I researched up a bit more on the form of these old maps and adopted a more realistic approach. One of my favourite discoveries was the wind-roses and their associated rhumb-lines. 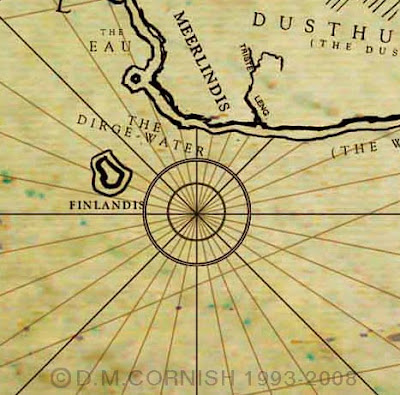 Posistioned at junctions of latitude and longitude they are an aid to dead-reckoning, where a master or captain or navigator with arrive at such a juction and be fairly confident from an study of the map that proceeding from that point on a certain heading will take them, over time, to a particualr places. I like the idea of the Half-Continent map actually being a map a seafarer on the vinegar waves would be able to use to get about the littora.

Having done all this to my satisfaction (one month solid later) I added the textured back ground, which is made up of all sorts of layers of bad-scan smudges, dirty painted paper, even bits of that early v2.-something map. I would tell myself a story as to why some of the marks were there: the large red smear in the top left corner being spilt soup, the greenish stains in the bottom left being potive marks, some of the off blues in the middle being mold, the red mark in the bottom right maybe even a dried blood stain. All a whole lot of fun.

Now I just have to pull my finger out and get the online map happening. It is turning out to be more complicated then I first conceived, so please be patient - writing books keeps getting in my way ;P

Anyway, I hope this goes some way to answering the question.

I can't really put my finger on it, but the coastline looks vaguely familiar. Did you base it on an existing landmass?

Actually, now that I think about it, it kinda looks like the coast of South Australia with the Fleurieu Peninsula and Kangaroo island left out. Kinda. Maybe I'm alone on that theory. :P

Anyway, I really love the level of detail on your map. Very intricate. :D Looking forward, as always, to book 2.

The Half-Continent is, in a sense, Australia with European history happening in it - after a fashion, this is not an exact thing, just "kinda".

The first city I ever invented there - Brandenbrass - is an outworking of my memories of holidaying on the Yorks Peninsula and looking across to Adelaide - yet gloomier, cooler, more autumnal.

You've covered all the map info I wanted to know with this entry. Thanks!
I like how the final HC map is almost a Frankenstein of elements, all stitched together…something almost Sinster-like about that. The color reproduction with the stains looks terrific.

( Yes, I'm afraid “Nonny Mouse” was just plain ol’ me, who forgot to sign his name)

I'm also a fan of the soup/blood map. I remember the first time I opened Foundling. I took one look at the map with its minuscule font and EXTREME detail and though, "Damn, this guy has really thought about this world." I was truly impressed (and I hadn't even read the book yet!).

You know the frustrating thing is that having fixed everything down I have come to a point in Book 3 where I am thinking "Mate! I want that place over here now..."

Dare I admit such falability?

"Frankenstein"-ian map, markus - nice; and there is nothing "plain" about you (however upon your age I cannot comment)

I just keep hoping jamie, markus that a colour full-size poster gets out there for those interested folks to have and to hold. My memory of positing posting a .pdf of it were that this was not viable from my publishers' point of view.

Mate! I need a memory upgrade...

It's interesting to see this post, I have seen the evolution of America maps and it's so cool to see how most of its maps are pretty similar... even before Christopher Columbus. if69

How did you create all the names for your maps? Do you keep a list of favorite words or something like that?

(Sorry if this is a reiteration of my previous comment, which is not showing up, for me, anyway)

blood depicted in tattoos designs makes it a special

I was gonna say it looks an aweful lot like Victoria, with the Murray at the top lol