This time I thought I would show you what the Australia/New Zealand MBT edition endpapers look like, just to give those in other publishing regions a chance to see what they otherwise might not.

First is the book plate for Foundling, actually printed black on brown, done in this scheme because this is the mottle of Boschenberg. 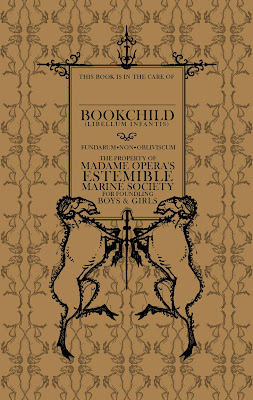 Secondly (and unsurprisingly) is the book plate for Lamplighter, done in the mottle of the Haacobin Empire. The owl is what the lamplighters affectionately refer to as Ol' Barny, the Sagacious Owl that is the sigil of the Haacobins. 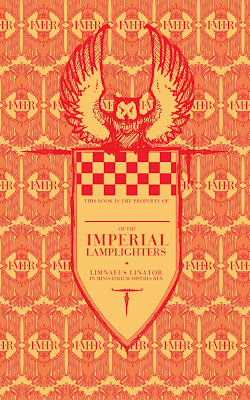 The idea is to give to those who are into it a sense of the books actually belonging in the Half-Continent - as coming from there somehow, to add just that little bit more immersion to the experience, to actually make the owning, holding and reading of the book as sensorialy satisfying as possible.

It has so far been a great joy to figure out what plate to do for each book, a challenge which asks me to go deeper into the world than previously. Indeed, I thought I had a lot of information after 30-odd notebooks on their own, but actually writing and designing for the MBT series has me going much further into the Half-Continent than I expected. I can not say I mind either (well, not most days anyway).

Next challenge: Book 3 (Factotum) - I have my thoughts... in fact it was writing this post that gave me an idea...

I agree, the endpapers really do immerse you into the HC from the get-go. I definitely appreciate the work you put into the design of your books. ( I know what you mean about "most days, anyway". Creativity is rewarding but it can be a burden at times.)
The new Lamplighter endpaper looks terrific! Thanks for the preview.
A bit off topic, but could you maybe talk a bit about the HC map in a future entry, how you went about creating it, etc? It's a work of art in itself and I'd love to know more about it.

Again with the jealousy and greed. I, too, like the added bit of immersion.

I personally love the owl, which is one of my favorite animals (my first tattoo was an owl).

Hmm, source for another post: thank you so very much, Sir annonymous, always happy to answer such questions. Stay tuned.

Now, I had better get back to Book 3. I have been online "researching"...

(Actually, I have been researching, just finding images of antique furniture with which to charge my apparently photographically descriptive pen. Mission successful, back to the blank page I go...)

Oh, I agree, jamie owls, along with egrets, any kind of corvid-bird and willy-wagtails are among the coolest birds on earth. Actually I reckon all birds are spectacular and cool from big to tiny... except maybe starlings. Filthy, introduced things!

DM,
"Factotum" is it? Hmm... that isn't TOO suggestive! (lol)
As noted in the comment one post down, I'm loving LAMPLIGHTER. Rossamund is a terrific young hero, who has a lot more to him than meets the eye.
I hope Threnody stays around too-- she's a great character and I like her as much as I do Europe (whose relationship with Rossamund seems likely to become complex.)
all best,
Drew

Hmm, drew, maybe it is too suggestive? I have established a rule with the sub-titles but am I saying too much with the proposed name for Book 3?

As to Threnody: well that ties in nicely with a recent email conversation. This will make a good subject for the next post... coming very very soon.

GENIUS DM!
I just finished Lamplighter, and once again, it was great, just like Foundling. In regards to the title, of book 3, it is perfect, it fits the flow of the title matching the current role of the character and where he is going with that role.
However, the purpose of the post is too ask; is this series going to stop at 3 books? I remember you saying that, I think, but I am hoping that due to the attention you have received, that things may have changed. Can you inform me please?

DM,
I don't know if I'd say it's too suggestive-- the narrative thrust is moving Rossamund in a very definite direction and the possibility has never been dropped on either side.
Given Rossamund's issues toward the end of LAMPLIGHTER, it isn't hard to see how that would come about... but for those who haven't read LAMPLIGHTER, is FACTOTUM giving too much away? Not sure I can be objective here.
And by all means, more Threnody! She reminds me of girls I knew growing up. (BTW, DM, you seem to have a thing for ladies with rough exteriors and hearts of gold...)
all best,
Drew