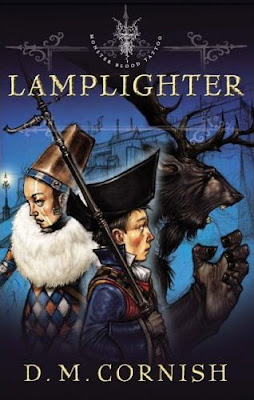 Above is the US Edition cover for MBT Book 2: Lamplighter.
Below is the ANZ Edition hardback cover. 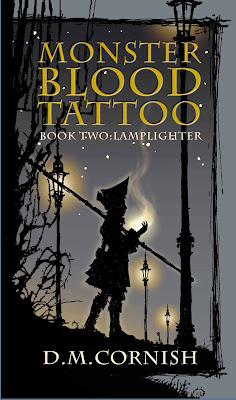 I LOVE the ANZ Edition hardback cover!!!!!! Is it acctually grey or is that the way it came out when you put it on the blog? Also down the bottom in the border is that meant to be there? Anyway great job in finnishing the second book, i can't wait to read it! When can we see it in the stores?

I may have to buy both to make sure I keep my sets looking the same!

Will the hardback - which looks awesome, by the way - be the same fabric cover as the previous one? Because one of my biggest hates is when I'm working on collecting a set and the publishers change the cover halfway through the series. (I'm looking at YOU, publishers of Jasper Fforde's Thursday Next series...)

It will be out May next year, Kathryn, and it will be grey - much like it appears here.

As to the fabric cover, femina, yes indeed it remains for Book 2 and, Lord willg, Book 3 and onwards, too. Dyan and I have our thoughts firmly fixed on the collectors, the faithful ones.

Clocking in at 718 pages all up, having held a printers sample, the book feels more like an old style dictionary than a novel.

Sorry about the multiple sets, Mr Bomber, not my intention that is for sure. You'd be surprised how little say I really get as to how covers in other countries look. Often there are sizeable marketing departments who demand what they see as necessary variations. Some of the results are brilliant, others less to my tastes.

Yet one of coolest things about being the author is every now and again I get a box delivered full of a stash of some particular edition. I have quite a stack of different versions of Book 1 now.

... only problem is, I already know what happens in them :(

I don't mind two or more sets, I was lucky enough last time to receive the ANZ edition when Dyan came to our tute group.

I merrily waved my US version of Foundling around in the air, and she offered me the ANZ one!

Of course that means I have the ANZ paperback, and the US hardback but meh, the paperback is great for loaning!

It would be a worry if you read a non ANZ version and the ending wasn't the same. O_o

Worrying indeed ... I had better go and check them...

Perhaps that is where your objectionable material is being filtered through!

yahooo! that looks so awesome. i really cant wait till may tho! *cries*

Congrats on getting these out... Very well done.
Love the colours on the US cover but prefer the fonts and branding on the ANZ one.
Oh yeah, I think you should arrange for the stag on the front of the US edn to get a bit of sleep in the 3rd book... he's yawning! ;-)

Wow, those covers are outstanding! Thanks for the preview :)
I like them both very much, but I guess I'll be getting the Aussie hardback.
Is that Winstermill I see in the background of the US edition?

I really like the ANZ cover. It is similar to MBT cover. It seems that US publishers always change the covers so then your books don't match. This drives me nuts.

I really dislike the ENG one compared to the AZN, im guessing thats how its going to be released, is there any way to get a copy of the AZN version, I would really like to add to my collection, would go so well with foundling in red.

Hi D.M.! I love both of these covers -- I think they're both beautiful! I like the US one a little better because it has a monster in it too and I think it would spark my interest a little more if I didn't already know it was about monsters. I do like that the Oz version has Monster Blood Tattoo prominent, because I really like the series title, and have been surprised to hear some don't. Either way: both awesome!

Aye Markus, that is Winstermill in the background - indeed you can expect an illustration of Winst (as I sometimes abrev. it) in the text - a "character" image, if you like.

As to Australian (ANZ) editions of Foundling and >, googlejaz, you might try checking out Galaxy Bookshops. They only have Foundling in stock at the moment, Lamplighter not even being printed yet but try there for a start.

[Just a note: I am not usually in the habit of promoting one place above another, it is simply that I know Galaxy stocks the ANZ edition at their online store. If people know of other ANZ sellers, then let us know, please.]

...and thank you Laini, I like Monster-blood Tattoo, too. I hope one day it will be vindicated by overall public response.

Excellent. Like the bold graphic nature of the ANZ ver. Look forward to seeing some more of the inside illustrations. Any kind of visual companion guide in the wings?

the aussi lampligher matches the foundling one perfectly .... coodos to the ilistrater .. isent that you?

Sure is, sir. Cheers!

Hey DM,
I really like the aus cover because the silhouette leaves alot to the imagination. It leaves the reader to envision for themselves what Rossamund might really look like. The contrast of the lamps is really nice too. I reckon you've achieved alot with the use of only a few colours. Good job! Also out of interest, does MBT2 come out in SA the same time it does in the US? I think it's unfair when they release stuff in US first before anywhere else. Regards! :D

Hey lankysam I think the US edition of Lamplighter will be out maybe 2 weeks at most sooner than the Australian edition. I have certainly not made things easy re: delivery times with my last minute edits, so it may line the release dates up more.

Still, only a couple of weeks is not too bad, hardly anytime at all when compared with the wait I have put folks through to even have a book to release.

And how are you doing?

I really like the ANZ cover, it has a strong design, nice colour scheme (love the dominant grey!), a nice atmospheric feel, a unique character and should have great shelf presence as there's not much else like it out there.

The US edition is okay but doesn't quite have the strong composition and impact of the ANZ cover.

Mind if I ask why the different covers?

Howdy Rowan, fellow illustrator. I have discovered that eachpublisher in each country has their own ideas of what will fly as far as covers go. Consequently there are about as many different covers for the MBTs as there are differing language editions (about 13). This makes for a very interesting stack of diversly sized and illustrated books.