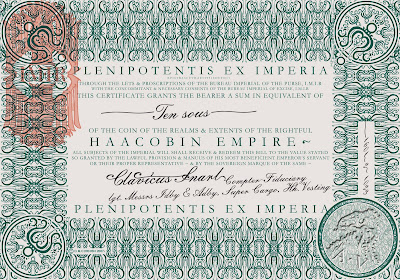 This is a replica of the 10 sou folding-money note (sometimes called a folder) that Rossamünd received from Europe just before he departs for Winstermill - actual size is about A5.

The red stamp in the top left corner is the Imperial Sigil made as deep-dye mark. Pressed into the bottom right corner is the Sovereign Marque - made using a form, a metal rod cast with a state's sigil - or marque - which is placed on the paper and hammered once and firmly with a small mallet to leave an imprint in the paper. Such forms are highly valuable items - I can see certain insalubrious folk plotting how they might steal one to further their own nefarious causes. The sign "A.V" in the marque stands for "Arius Vigilans" - the Vigilant Ram of Hergoatenbosch.

I thought some folks might be interested in knowing what folding-money looks like. I have been spending some of my inbetween-books time (that being Book 2 Lamplighter - now with the printers - and Book 3 - still no official title yet) figuring out the convoluted systems and industries surrounding the production, issuing and redemption of the humble folding bill.

Such periods of pointed and concerted invention are enriching, giving me an continually expanded view of just what makes the Half-Continent work; all those folks bustling about: the printers and their secret-vault presses, the guarded trucks taking the bills to banks and other authorised issuers, the halls of clerks keeping track of the movements and uses of the bills through an unwieldy system of logs and ledgers, the revisionists sent out to investigate frauds and forgeries. Fun, fun, fun.

Also, I have at last coined Half-Continent terms for the words mooseguy kindly challenged me with. So here goes once more, Half-Continent synonyms for real-world terms #011:

mobile phone = in full these would be called eloquiproculogue, sometimes shortened to proculogue, or voxeproculogue, though everyday folks would call them ablongs ("from afar")

internet = technically it would alternatively be known as the astrapemethodologue or fulgurcoetre ("electrical gathering") shortened to the fulgurcot, though once more the vernacular would be the somewhat simpler epistulane, with emails being commonly called epistles (a briefer form of fulgepistulës) or coets.

democracy = well, technically I could simply use the word "democracy" and be done, but where would the fun be in that?! So the Gotts for example, have two terms for it, stimmanteil ("voice-sharing") used in a positive sense, and lumpelämend ("rascal-noise") used pejoratively. Given that the Gottish political system is essentially an imperial dictatorship, lumpelämend is the more common in current times. In the Haacobin capital, Clementine, the term vox paritas ("equal voice") is being thrown about more and more frequently, it detractors deriding it as glaucaloquia ("sweet-talking") - a whole lot of frothy nonsense: the Empire will not stand - and therefore the dominion of men against the monsters - (so they say) if power is shared about to any old person just because they feel they would like to have a go a running things.

Also, would you keep Jay (I introduced you to him last post) in your thoughts: he is going through very tough times at the moment.
Testellated by D.M. Cornish at 9:52 am

Very interesting information about this bank note and about folding money.