A new entry at last! ... also, I reckon I should have called this page the above - except that people might find it harder to discover.

MBT Act 2: Lamplighter is certainly coming along, will be of greater girth than Foundling, but i warn all those who hated the 'Explicarium' - it is the plan to have another, so watch out at the rear parts of the tome: the story will be ending sooner than you think... and for those who love it, well there will be more.

I reckon a sneek preview might be in order, so here is an illo (that's what we call them in 'The Biz'...) of a new character. Let me introduce Threnody... but that's all I say on her. 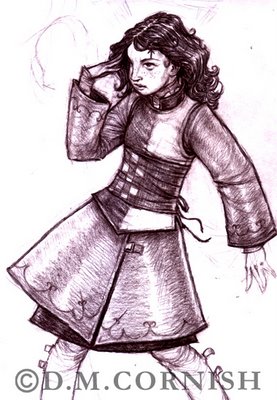 Madbomber asks: "I have a question, what games do people play in HC? I'm thinking particularly in Taverns, when they want to gamble with one another. Dice or cards, or something else?"
Well, first the rivet counting: there are no such things as 'taverns' in the Hc, there are ale-houses, wine-shops, rum-stops, and of course way-houses - amongst other places. But as to what you are actually asking, checkers is a popular pass time - played for money, of course - many types of card games: casino, lesquin, rustic dig; plus, at the right places billiards is provided. More illicit 'games' include the fighting of various animals against each other, a pass-time which has connexions with the dark trades.

For breakfast I had Vita Brits [TM] and sultanas, swilled down with a delicious pineapple and strawberry smoothie my spectacular wife made for me. Yes marriage agrees with me indeed - and not because of the food! but the care, the new life-lessons.

And now: Half-Continent synonyms for real-world terms #006
Thank you to two of my regular blog-buddies for yet more of a challege!

rainbow = well, just rainbow, sorry, though if I wanted to get really technical, a habilist might term it a luxicromatofornix.

university = hmm, as a broad term you might have a collegium or bibliotheca where many kinds of habilist will go - for example: a tungolatrium for the study of tungolitry (what we would call 'astronomy'). Add to this, however, that skolds and some dispensurists train at a rhombus, and physicians and surgeons at a physactery, mathematicians will study at an abacus, and concometrists at an athenaeum... and so it goes.

Here is a challenge for those who want to take it on: give me a word and I'll attempt to render it into Half-continent speak.

In regards to your request for words to translate, how about some Hc slang? Something along the lines of "brilliant/cool/awesome" or for something that is "worthless/broken/useless".

P.S. Thanks for the comment back and for taking the time to read my blog. :)

Ah, Mister Misfit - that would be an excellent example of 'my sieve of a mind' as mentioned the the acknowledgements of Foundling. So so so sorry!

I shall answer your quieres in the next post, which will, Lord willing, be coming soon - Book 2 is very consuming at the mo.

thank you that you have not completely forgotten me

Ahh Mr Corn.. here I am contacting you via your blog.. I guess I could always pick up the phone. How do you get time to write a blog while you're neck deep in MBTII?? Is it cos your new bride is waiting on you hand and foot, bringing you smoothies as soon as you snap your fingers? Now stop blogging and put those chains back on and write that book (said in a fake stern voice). Mr Ip.
ps. the rest of the Ip family doeth well. It was Mrs Ip's birthday yesterday. Baby Ip slept 7 hours for her!!

Hi, I was wondering when the halfcontinent.com site would be online? I just reviewed Foundling and in the comments it's come up that a click and zoom function for that map would be great :-)

i was bored s i dicided to ask another question, dose Master Fransitart come to tell Rossamund who his parents are (i'll know he is if you avoid answering this)


ps. i only did that mr missfitt thing because everyone else is

i have a word- sweat or more pecificly what do you call it in the m.b.t realm?

hey i noticed on your blog profile that u like the white stripes, this is a reinvented song of theirs:
i was washing,
i did the laundry by myself,
i had all these red + white clothes of mine,
and all mac's gear aswell,
i put a load on,
but i didn't pause to think,
i forgot to separate whites from red and now all my clothes are pink!
1234
looking knd of nasty,
but i didn't think all day i'd be feeling like a pansy,
all my rockstar credit is down the sink!
5678
i'll never say never,
but i'll never score again with ren'ee zellweger,
all my clothes- even my hat is couloured pink!

I was just doing some browsing and thought I'd stop by and check on the MBT progress.

I'd like to try and stump you with a word, but it seems impossible. So I'm interested in the gods of the half continent. Who or what do people believe in? It seems that science plays a large part in many of the professions. Perhaps a version of Scientology?

If this is so, are there people with similar roles to that of Tom Cruise.

I jest, but I am interested to know this aspect of your wonderful world.

BTW I've got dibs on Black and Red and whatever word you replace Bombers with. :)

I can't wait for the latest installment. Hope all is well.

hmmm... we seem to have lost an author. "Mr Cornish! are you there?!" please answer our questions on the next blog, and make sure that the next blog comes soon!

Firstly I just have to say, bloody good book! A definate master of the pen for both word and illustration!

Secondly, what advice would you give to a budding illustrator???

I recently gave up a rather stressful job to follow my dream of drawing doodles all day, heh heh. I'm at that point where I have a portfolio and no idea... I'm just not sure where to go or what to do.

If you get the time I'd be grateful for any advice.

I can honestly say, having read your book to the end. And then with a bit of online searching I am left with only one emotion. Anger. Not at you or your wonderfull book. But at the fact that I have found an entrancing story in the making, of which I must wait paitently for more, rather than a story completed of which I can devour with haste. My compliments on one of the few books in a dozen years that upon picking up I was left with no choice but to order food, and finish little Rossamund's story, before setting down. I applaud you on creating a very sucesfull intrigue, and gaining a new and lasting fan.

how to remove tattoo at home said...

It is one of the home remedy to remove the tattoo is, Aloe vera is used for removing tattoos on several ways, but this solution doesn’t remove them completely. if you want complete remove a tattoo, you need to mix honey with aloe vera and massage the place where a tattoo is
how to remove tattoo naturally
tattoo gallery
tattoo removal cream

Great post. thanks the sand powder method can be treated as one of the most effective way to remove a tattoo at your home in natural way.