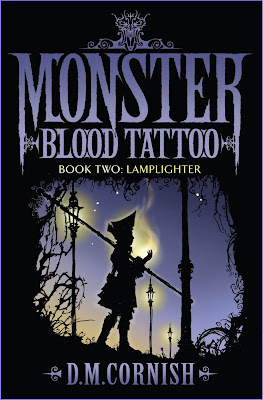 Here is the front cover of the UK Edition of Lamplighter. Lovely, lovely, lovely; I am liking it a whole lot - it has a wonderful flavour all of its own. Your thoughts?

Go here to see the US and ANZ covers if you have not glimpsed them before or just want a refresher.

And please keep the answers to these questions coming - I cannot enthuse enough about how great the answers have been . If you want to read other people's most excellent ideas, for now check the comments here, here and here.
Testellated by D.M. Cornish at 8:55 am

I am jonathan said...

Very cool. Close to being my Fav.

hmm new posters?
anyway i like it nothing on the anz version tho

ohh and hows book 3 coming along?

Hey, I really like that! Well composed, the text and detailing is very interesting and works very well with the illustration style and colours. Great shelf presence too.

Hello. Sorry haven't been around in the comments lately, work has been v. busy. I'm on vacation and catching up on my back reading, so I'm glad to see you're still taking answers to the questions. I would have been sad to miss out. So here’s my HC character, apologies for the length, I got a bit carried away in the details.

·What would be your name?
Votive “Vo” Glacialis

·What part of the Half-Continent would you live in?
Rural area, but nothing threwdish. An area with just the right mix of wilderness to support monsters, but bucolic enough to give the residents security in their towns, for the most part. I’m not brushed up on HC geography, so I guess I’ll say somewhere in the Soutland, perhaps between the Piltdown and the coast or around Hergoatenbosch?

·What would be your social station?
Peon. Vo may be from the lower class, but she has a minor bit of celebrity in the area she normally traverses.

·What profession might you choose?
Guide, guard, trader, messenger, runner of errands. Vo earns her bread by traveling between the various towns and villages of the area. She does everything from guide and protect travelers to ferry goods and messages. Her normal range is not great, but for the right price she will journey to larger towns or farther abroad. Less traveled than a wayfarer, but more so than any peasant.

·Would you be a sedorner (monster-lover) or invidist (monster-hater) or somewhere in between?
Vo has a live and let live philosophy towards life in general and monsters in particular. While she has had to fight off her share of nasties she doesn’t believe in going looking for monsters to slay. She is always careful to make sure no one thinks her a sedorner because it’s bad for business and maintaining one’s freedom. Secretly, though, she wouldn’t mind seeing monsters and humans living in peace.

·What would you look like?
Vo is a bit above the average woman’s height. She has a lean, muscular build. She has brown hair and blue eyes. Her clothing is cut to be practical rather than stylish, although, she does have a frock coat. Her clothing is a mismatched set, as she simply replaces an item when it wears out with no thought to matching in cut or colour. She wears her hair in a short ponytail. Her looks may be plain, but her eyes are bright. She has an animated face, an energetic spirit and vivacious manner. She carries a sword and pistol, but favors the sword because “the sharp of a blade never misfires.”

·Would you have spoors or cruorpunxis?
Both, even though she thinks cruorpunxis to be loathesome. Vo has two spoors on her left arm, a circlet of blue on the wrist and a circlet white several inches farther up the arm. The are meant to symbolize a journey, a reassurance to employeers that she always comes back, but amongst friends Vo calls them her “poorman’s jewelry”. Her cruorpunxis is a red whorl on her right bicep. Close inspection would make one think it was poorly done and unfinished, which is the case. Vo had the bad fortune to be attacked by a vicious blightling. In the course of the struggle she killed the monster. After she passed out from her injuries the villagers took it upon themselves to see that she got her tattoo. She woke up about halfway through the process and punched out the man doing the tattooing. Hence, its crudeness and incompleteness. Vo keeps this mark hidden.

·What else would be interesting about you?
Vo is an accomplished fighter, she has to be in order to survive. She doesn’t follow any particular style as she has had a number of teachers over the years. She was raised by her aunt, a widow of a merchant, who saw that she received a basic education. She never knew her parents, her aunt told her that they died of sickness long ago. Vo’s aunt indulges her wandering and fighting, but is certain she will eventually meet a man who will settle her down. While she is content to roam familiar lands, occasionally Vo wishes to travel into the wider world.

Looking forward to your review, Drew, really really relieved you like Book 1.

A wonderful and fully realised character, Winter, so glad to have you back. I reckon somewhere between Piltdown and the coast is an excellent location for Vo - at least to start with. I can see her hurrying a message of great import from one walled town to the next, rain and thunder and some stalking beastie threatening.

Book 3, Master giantfan is on its way. Healthy and fruitful discussions with my publisher and my friends (Will & Mandi - as seen in the dedication) have me in a good place with its direction. Taking a break for Chrisy at the moment, but will straight back into it come Jan 1st (well, maybe the 2nd at least)

DM,
The review is in. Check SFRevu.com on or about January 1- I think you'll be pleased.
In the meantime, please ask your US publisher to send us an ARC of LAMPLIGHTER; we would LOVE to review it in time to help your sales!
all best,
Drew Bittner

I very much look forward to seeing it. As too an ARC of Book2 - I shall see what I can do for you, Drew.

Love that cover!
And thanks! It's a pleasure to correspond with an author whose work I enjoy so much. Here's looking forward to many future reviews!
all best,
Drew