Here is a (very!) rough prototype scribble of the possible formation of landmasses about the Half-Continent, a fair part of the southern lands of the Harthe Alle (snazzed up a bit with fancy computer trickery). This is still an ongoing exploration for me, which keeps things fun. 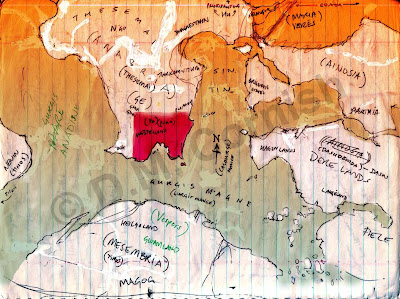 The pallid areas are landmasses, the orange to glaucous the oceans (the colour shift representing climactic/temperature change = north hotter as you approach the 'equator', cooler the further south you wend). The solid red mass is the Half-Continent as revealed to you in the Monster-Blood Tattoo books and on the map site. The names in parenthesis are largely old even forgotten appellations for the regions at the time of the Phlegms.

Given the size of the Half-Continent already, I think this would make the whole 'planet' rather large indeed. I believe that though our earth is the optimal calibration for life, a much larger globe is theoretically possible, and even if it weren't, it is now.

Thankyou for being awesome enough not to die before presenting something like this! Something that always irked me about Tolkien is that he died a good 9 years before I had to chance to ask him to draw the rest of the map.

How much of the rest of this is "populated" by your imagination? In vague terms, even. You do have a very large world there, Mr C...

And thankyou for sharing a little bit more of your things.

Cartography in stories such as yours will always interest me. I can't be more blunt than to say how enriching it is to be able to refer to a map's detail as the story continues.

Medismin: Any horribly tasting concoction that has little to no beneficial properties yet claims otherwise.

Me was alive at least 9 years before tolkein died? Hang on, when did he die?

Oh, I love maps. A good map adds so much to the story, and it's awesome to see more of this!

If I remember correctly you can have a larger planet with Earth comparable gravity provided the larger planet is less dense. Or you know, you can just "because I'm the author and I said so." ;)

(Those of us who follow you on Google Reader love you, too.)

I always crack up reading your posts because I read along with my OED. Glaucous!? Yes, now I know it's a dull grayish-green or blue, and thank you for the further expansion of my vocabulary.

Word Verification Vocab:
Expuwwar: a tincture of spirits of lime and rosemary guaranteed to remove soiling from oilcloth.

Most surmise that a more massive planet than Earth would affect the physical structure of its inhabitants such that they would be comparatively more squat and "compact" than Earthlings because of the correspondingly larger gravitational force pulling them to its surface. But as Winter said, a larger planet could be less dense and so have a mass equal to that of Earth. Gravitational attraction between masses also increases as they come nearer eachother. For example, an item weighed at a location on Earth that has a low elevation, and is thus closer to Earth's center of mass, will register a heavier weight there than it will at a higher elevation which is more distant from Earth's center of mass. I do not believe that such observations as this need dictate how the setting of Monster Blood Tattoo is concieved or portrayed, and I am greatly taken with the "globalness" of its setting.

this is what is nice about fantasy--you can just say ''oh? That wouldn't work in the real world? so what?''

a very very large place, this...and now I'm all curious about what's on those other continents, even though we haven't seen half of that little red bit.

spawses: a version of water-wings, usually leather or something similar, rented out by tour guides as liability-removers for tourists crossing the greater swamps

I love the fact that this map was drawn on a sheet of lined notebook paper. Takes me back to my younger years when I would draw maps of fantastic worlds while sitting in school.

I'm still in awe of how detailed the map is, of the Half-Continent. Generally story maps are... well... not to be rude or anything, but quite half-arsed. Safe to say, I've seen none at all that seem as thought out and refined as this. It may seem like I'm dishing out the flattery here, but in all honesty. Mr. Cornish's work deffinately stands alone. Does anyone know of another published fantasy map that is otherwise?

Even Rovert Louis Stevenson was a bit rough. I can make neither head nor tail of his map. But I guess I should blame that on the pirates who supposedly illustrated it >.>

Seeing as we're on the topic, I just noticed on the map two locations named 'Droid' and 'Drone'. Subtle tribute to sci-fi I wonder?

And from their locations west towards Boschenberg is (as I can make out- screen fails to load big enough view) 'The Battling Way'. An interesting experience it would be to travel that road I can imagine...

I think the word "cartography" is awesome. That said, I have absolutely no head for it beyond those children's pirate maps with the dotted line and the big black X marking the treasure. I think I'm the odd person out here...

Matiario: a teratologist who makes a living slaying monsters as a spectator sport, similar to a bullfight or a gladiator fight.

Well me, pretty much all of it is populated in my imagination, to some degree or other. As a rule in all the lands men get the coasts, monsters get the middle.

Flatter away ENR - I still think a phsychologist would have a lot to say about just how deeply I have gone (and continue to go) into all of this...

I was thinking populated more along the lines of having a even vague notion of the peoples, history, etc (in your notebooks/noggin) of all those gigantic hazy lands. Not that we're not satisfied with what you've already detailed, but it would be interesting to know...

I agree with others that your map of the Half Continent is a wonderful addition the story. But maybe “addition” is too soft a word? It’s more as if the map, with all of its fabulous detail is an essential ingredient. You mentioned in an earlier post how Robert Louis Stevenson wrote Dr. Jekyll and Mr. Hyde in only three days. Assuming that you had at least some admiration for that feat (not just a fascinated horror) you might be interested to know that Stevenson gave all the credit for the inspiration for Treasure Island to a map of an island that he absent-mindedly doodled one day. It sounds like perhaps you work in a similar mode? In any case, I love the explorable Half Continent map you have on this website, and appreciate you showing us your ideas for lands-to-come.

But in two big books (and presumably a third) you’ve only explored a smidgen of even the Half Continent. Unless you start writing books in three days a la R. L. Stevenson, or your next main character is a Marco Polo sort of fellow, there’s no way you’re going to explore the rest before you die! Or perhaps you intend it that way – to always keep your readers intrigued by partly-sketched hints and mysteries at the edge of the story?

About the big-world issue… in Robert Silverberg’s world of Majipoor, he avoids everyone being crushed by extreme gravity by making the world hollow. Pretty far fetched, I agree, and my suspension-of-disbelief couldn’t quite swallow it; so, I just “intentionally forgot” the issue, and enjoyed the story anyway. Your story is even better than Silverberg’s, so I wouldn’t worry too much about the logical consequences of a huge world. If you simply ignore it, it wouldn’t bother me – or most people - in the least.

And a final question: is your general rule of humans on the coasts and monsters in the middle consciously influenced by the geography of Australia?

Best wishes on your continued writing. I was, by the way, one of the folks who got to see your temporarily posted revisions of Book 3. You can tell your publishers that I wasn’t able to deduce anything other than that the first chapter must involve a lot of bloodshed.

I am currently in Arizona. Can't really comment, but will catch up when I get back to Aus.

The south pole I think is where Atlantis is buried, there are evidence of this been true, many ancient texts and maps depicts antarctic without the ice, with mountains, rivers, almost like a warm place.