I just thought today I might show you a rough I received from my French publisher, Milan, for the cover of the French (surprise surprise) edition of Foundling. 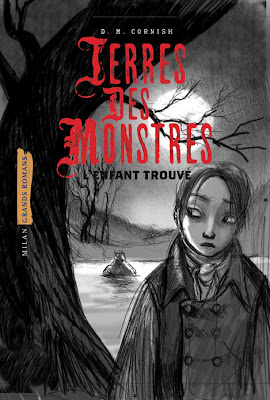 The title, roughly translated, is "Land of Monsters" and the subtitle, "The Child Lost" - sounds so much better in French, I reckon. (I now know that it in fact means "Child Found" - still sounds better in French)

I was warned that some publishers would want to show Rossamünd's face and here is a good example. After acquiescing to my US publishers about revealing Ross' dial, I am no longer fussed about such things - it was a cute idea of mine to leave the reader's conception of him to themselves but it has not survived "translation". Indeed, given the current results of the 2nd Poll Question, it would appear that this is in fact a good thing.

I am truly learning this writing thing each day.

Either way, I really like the cover, which will be illustrated by a certain French illustrator, Benjamin Lacombe. Said to be '...one of "the most brilliant and popular artists for young readers'...", Mr Lancombe's work is at times dark and melancholy, whimsical and fairytale grim, just how I conceive the Half-Continent. So, this will be the first occasion another professional will have attempted to illustrate MBT (though let us not forget the excellent work done by Spanish readers), which I think is rather cool. If this is a rough then I am very very much looking forward to the finished cover. What fun!

...oh, and for breakfast today I had a pineapple, yoghurt and caramel smoothie.

(Also, I do not know if this is a bit lame but I have put a little white widget box some way down the righthand side with a small sellection of some electronic music of my own compisition. Just wanting to share.)

Hey, love the book, can't wait to read it in French too. Just thought I'd let you know that "Land of Monsters" isn't a rough translation, it's spot on, but "L'enfant trouvé" means "The found child" rather than the lost child.

What was I thinking?!

Glad you liked it, Master A Nonny Mouse.

DM,
Am about 100 pages into LAMPLIGHTER and enjoying it greatly. See? Any fears were completely unfounded.
Have to admit, I would miss it greatly if you were not doing the art for the books yourself. I like the American cover to LAMPLIGHTER a great deal and would be disappointed if someone else was subbed in for you.
This comment is not precisely relevant to the post but... such things happen.
all best,
Drew

It seems a slight shame to not have your own art on the cover. But on the other hand, it is a really nice cover. "Brooding" is the first word that comes to mind.

Speaking of your art, I read a couple of Kim Wilkins' Sunken Kingdom books and really liked your illustrations there too.

An entirely relevant comment Drew! Very happy you're liking Lamplighter - I found a less positive review the other day, so I hope you keep enjoying it.

As to others doing MBT artwork - I am surprised with how much I actually enjoy seeing different interpretations of the Hc. I thought I would be all posessive about it, but apparently not.

Thanks for the compliment re: Sunken Kingdom Jonathan they were a lot of fun to draw. I have illustrated another similar series coming out soon by Ian Irvine, so watch out for that one.

Thank you much for this post and for the one in my blog ( and in french!!). It's been a very nice experience to illustrate your incredible book. You've done an amazing work!!!

Am i the only one who couldn't find the white widget box to listen to dm's electronic music??